Everyone I present to you Kristen Twardowski!

She’s works in marketing and data analysis within the book industry, an avid blogger and author of a new psychological thriller, When We Go Missing.  Kristen is also participating in the inaugural launch of Mystery Thriller Week.

Once, Alex Gardinier was a successful physical therapist and a happy wife. Now she is trapped in a crumbling hospital room. Seven years ago Alex’s ex-husband, Nathan, was convicted of murdering five girls, and he has been rotting in prison ever since. Except the doctors say that Nathan isn’t in prison. In fact, they don’t believe that he is a criminal at all. According to them, Nathan is a devoted husband who visits her every week. But Alex can’t recall ever seeing him at the hospital, and the last time they met he was holding her hostage on a boat.

Maybe the doctors are right – maybe these memories of his crimes are her own personal delusions – but if they are wrong, then Nathan somehow escaped from prison. If they are wrong, he has trapped Alex in a psychiatric ward.

If they are wrong, he is hunting her sister 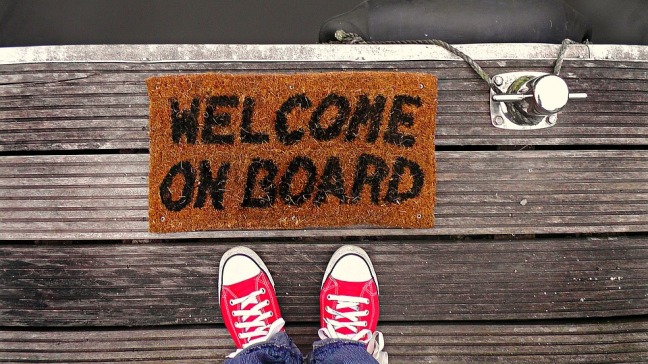 Where are you originally from?

I’m originally from a cornfield in Illinois but have lived in several different places across the Midwest. I’ll always have an attraction to the flatlands because of it.

Yay! The Midwest is awesome. Plenty of cornfields here!

What did you study in college?

As an undergraduate, I studied history and art history. When I finished my graduate degree, I studied gender and the history of Imperial Germany.

Wow. This is rather impressive. I took an art history course once and it was pretty difficult.

Did you used to be a librarian?

Though I worked at several libraries, I never held the position of librarian. Most institutions want to hire people who hold library degrees for those roles. Instead, I held customer facing positions in an undergraduate and business library. There, I did things like organize events for speakers and authors, help manage the acquisition of journals and magazines, and do reference work, which involved helping people find the reading materials that suited their research needs.

That sounds very intriguing and not to mention good work experience.

What do you do exactly in publishing?

Currently I am a sales and marketing research coordinator for a small press. This means I perform several different functions that have to do with data and book promotion. In terms of data, I do analyses to see where we have opportunities to expand our books and journals programs and make suggestions about how to package our products. This also means that I pay a lot of attention to how money flows through the press. Though I don’t directly do design work, I help to write marketing copy for items and give input on promotional materials like posters, emails, and information on our website. Prior to my current position, I briefly worked in the acquisitions department of a different publisher. While there, I helped edit manuscripts, assess submissions, and write rejection letters.

This is amazing. You have an amazing, well rounded skill set!

What do you love most about fantasy?

Fantasy is my great passion. It’s the genre that I was raised on and the one that I always return to. Because they tell stories that are a step away from the real world, fantasy novels often get to the heart of what it means to be human. They delve into our strengths and weakness, our hopes and fears, and they let us dream. What if the world was different? What would we do then?

Some authors that represent the best of fantasy are Diana Wynne Jones, Melanie Rawn, Peter S. Beagle, Jan Siegel, and a dozen others. Oddly, my first novel, “When We Go Missing”, doesn’t deal with fantasy at all – it is a psychological thriller – but the feel of fantasy, the arc of its stories, the texture of its language, bleeds into my writing.

Nice. I still think it’s impressive that you can write a psychological thriller even though it isn’t your passion. I believe it’ll make you a better writer in the end.

“Fantasy is hardly as escape from reality. It’s a way of understanding it.”-LLoyd Alexander

How has reading affected your writing?

Of course complexity isn’t always best. I’ve had to undo some bad writing habits because I have spent a lot of time reading scholarly theorists and academic texts. Fiction requires a very different style. And no one wants to read a sentence that is the length of an entire paragraph.

That’s so interesting. You’re blog posts tend to be more on the scholarly side. I admire your style.

Why did you write a psychological thriller for your first book?

I ended up writing When We Go Missing through sheer luck. I am a fantasy author at heart, but When We Go Missing was a story I felt like I had to tell. Over the past several years, I have become more and more aware of the ways that people, especially women, really do go missing in America and the way that society deals with those disappearances. It was fascinating and horrifying realm to discover, and I wanted to explore the whys behind it a bit more. The story turned into a psychological thriller because that was the best way to tell the story without completely breaking my heart about the subject.

The premise for your books is mesmerizing. The theme behind it is also powerful.

Tell us how you developed this idea into a novel.

When We Go Missing was a writing experiment for me. I had different ideas about how I wanted to talk about women who vanish and decided that I needed to bite the bullet and write the book.

In July of 2016, I gave myself the goal of publishing this manuscript – I didn’t even really know what the plot was back then – in December of 2016. This meant I had to buckle down and prioritize my writing. I ended up finishing the rough draft in September and spent October and November revising it. I do not encourage anyone to follow my schedule. It meant working a lot of high density hours on a single project, and I always suggest that people give themselves more time to reflect during the editing process. Having said all of that, the contracted schedule was a great decision for me because in my heart of hearts, all I want to do is continually edit my books. Historically that prevented me from publishing any of them. I had to push myself to get over my perfectionist tendencies, and I am excited to share my final result.

Nice. Perfectionism can be a problem for sure. But I’m glad you pushed through it! Impressive.

What do you love most about reading books?

I love that books allow me to step outside of myself. Through novels, I can experience the world from a different perspective. I’ve learned a lot about myself and about others that way.

Very true. It’s an amazing experience isn’t it? We get tour another world, life, viewpoint, struggles and victories of another.

Most of my bookish pet peeves relate to characters, how they act, what they say. I can’t stand:

Basically I need characters to feel real. They should have their own motivations, weaknesses, and logic. I need to be able to convince myself that they could exist outside of the pages of the book, and if the author can’t portray that well, I struggle to stick with a novel.

This is great info here. I love seeing what different authors say about this subject.  I see authors fantasies as well, or an idealized trait that’s totally cliche.

Does When We Go Missing employ any themes?

When We Go Missing deals with several major themes. These include trauma, love, family, resilience, and, most importantly, what we do to survive. There is no single way that people react when terrible things happen to them or their loved ones, and in the book, I really wanted to explore the range of those reactions.

Sounds like a great thriller to me! A really deep one at that.

Is this a standalone or will you write more psychological thrillers?

Though When We Go Missing will likely not become a book in a series, I do have several other ideas for thrillers that are floating around in my head. My next project is a contemporary fantasy book, but I imagine that I will return to the realm of thrillers sooner or later. It provides a fantastic sandbox for authors to play in after all, and I don’t think I’ll be able to resist it.

Good. Don’t resist it! I can’t wait to see what you come up with.

A Challenge for Book Hoarders Like Me at SallyAllenBooks.com

Don’t miss the inaugural powerhouse event of 2017!! Check out Mystery Thriller Week on my other site: Mysterythrillerweek.com